Let me start this blog by telling you a story. Many moons ago, I worked as a veterinary technician for a small clinic. One of the veterinarians came in one morning with an incredible story to tell. A client had come in with one of her dogs, who was critically ill. An x-ray showed a massive blockage in the dog’s intestine, and surgery was recommended immediately to save the animal’s life. The client refused. According to the veterinarian, she told him he had to wait until the following day because the astrology wasn’t right for surgery that day.

Well, the vet was completely gobsmacked, but without the client’s permission, his hands were tied. There was nothing he could do except give the dog fluids and try to keep it alive overnight until the next morning.

The next day, the client called and gave us permission to perform the lifesaving surgery. All in all, we had to remove several feet of infected intestine, but miraculously, the dog pulled through. When the client came in a few days later to pick up her dog, the veterinarian told her how lucky that dog was. The client, however, shook her head and said, “No. If I had given you permission to do surgery that day, the dog would have died. You see? I waited until the energy was right, and the dog made it through just fine!”

This is one of the reasons why I’ve always held back from doing any kind of predictive timing with Tarot. It’s this kind of stuff that always turned me off when it came to the idea of using Tarot to predict when something would happen. I always go back to this story, and the line of thinking that tells us we can’t take action until everything is just absolutely positively perfectly aligned in the Universe.

The truth is that there will never be a “perfect” time for anything. Certainly, there are times that are more advantageous than others, but I’m just way too wary of relying on these things as a crutch without using your logical, rational mind.

I’m also wary of asking questions like, “When will I [get a new job, sell my house, sell my car, meet a new boyfriend/girlfriend]…???” Because I’ve seen the tendency in people when they ask these questions and get an answer go on to do…nothing. They take no action, and then say, well, the Tarot cards were wrong, because [insert desired outcome here] didn’t happen when the cards said it would!

So I go into the rest of this blog with a few cautions. First of all, if something comes up and it’s a dire emergency, take action. Don’t wait for the cards to tell you to do something. Just fucking do it. Need to go to the doctor? Go. Don’t wait.

Second of all, if the cards give you a general idea of when something will happen, it’s still up to YOU to make it happen! The Universe doesn’t just hand you shit when you want it – you still have to put the energy and the intention and the action out there to make stuff happen.

So, okay, here we go. With these cautions in mind, let’s talk about timing and Tarot.

Just like any good Tarot reading, formulating your question is half the battle. How specific do you want to get here? Do you need a specific day? Or can you be more general and ask for weeks, months, seasons, etc.? Before you pick a method for telling time with Tarot, get very clear on your intention.

Now for the fun stuff. Seriously, just give it a try.

Using the Images on the Cards As Your Timing

This is one of my favorite ways to do predictive Tarot. Use the images on the cards! If you’ve got a more general question, like, when is the best time to start looking for a new job? If you pull a card with a river on it, the next time you see a river, you can start your job search. Get it? Make it fun!

This one seems a little heavy duty for me, but…if you want to try some exact timing, pick a card in the Tarot that represents your question. Like the Ace of Pentacles for a new job, or the Ace of Cups for a new relationship. Shuffle it back into the deck, and then start turning over cards. When you turn over the card you chose, count how many cards you’ve turned over – and there’s the number of days, weeks, months, years, etc. until your event! Honestly, this methods intrigues me the most and I’ve some really interesting outcomes using it.

Using the numbers on the Tarot cards is, I believe, one of the most underestimated aspects of reading Tarot. I’ve always been big into numbers, and indeed, I find that I see a lot of those “angel” numbers throughout my day – 11:11, 12:12, 1:11, 2:22, 3:33, 4:44, and 5:55. (Seriously. Ask my kid. This happens to me A LOT.) So whenever I’m reading Tarot for myself or someone else, I always try to incorporate the numbers and their meanings into my readings.

You can use numbers in your predictive Tarot readings in lots of different ways, but the easiest is to just ask the question, “How many days/weeks/months until…???” You can use the numbers on the Major Arcana as your answer, or if you pull a court card, you can assign the following numbers to each one:

Each suit has a corresponding season. These associations vary from reader to reader, so use the season that feels right to you. I like to use the seasons with the suits like this:

Personally? I find this system to be a tad cumbersome. But if you or the querant are looking for really specific answers, this is about as good as it gets. 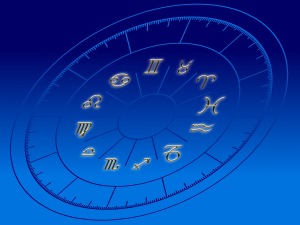 Oh, and more astrology! I hate astrology. I mean, I hate it when I have to do it for myself because I just can’t get a good grasp on it. The most difficult part of my training in Ayurveda was Vedic astrology. (I still need to look shit up in the book when I’m looking at a chart.) That said, each of the Major Arcana has an astrological association that can be used for timing in Tarot:

One Last Thought About Timing and Tarot

If this all seems a bit overwhelming, don’t fret – write it all down and make a cheat sheet! (And stay tuned for my upcoming Find Your Voice Through Tarot online course that will include a couple of my own personal cheat sheets for helping to learn how to read Tarot!)

As always, don’t forget: Tarot is always what you make it. The future isn’t written in stone – Tarot is just the lens through which we can focus the energy we feel surrounding a given situation. Tarot doesn’t predict the future, but it can certainly help us create the future that’s in our highest good!

Got a question about Tarot and timing? Go ahead and ask me here! Or if you want a personal, one-on-one reading, check out my Tarot services and book an appointment!

Growing up in suburban New Jersey, I never dreamed that I would find myself living on a small farm in upstate New York before I was 30. But for the last 13 years, my husband and I have been busy raising chickens for eggs, keeping bees for honey, and gardening, all while raising our son. In 2011, I discovered home remedies for anxiety after conventional medicine didn't work for me, and since then I have been educating myself through formal training and not-so-formal training about creating my own herbal remedies for common ailments. We love living the life of simple homesteading in the heart of the Adirondack mountains. We've dabbled in vermiculture and using worms to create great compost for our gardens, raising ducks for meat, and do all we can to reduce our carbon footprint. I spend my days in the kitchen cooking wonderful meals for my family, writing creative nonfiction and poetry, teaching yoga in a variety of settings, and creating handmade beaded jewelry of all types.

How to Read Tarot Cards